On behalf of Klaudiusz Ślusarczyk and NeMA MA students, the PJATK New Media Arts department would like to invite you to the next series of meetings on the theme of THE OTHERS: taking on ideas of togetherness and separation, our speakers in the upcoming series include: dr Tomasz Mazur - Stoic Philosopher / Writer (30.10.2019), Filip Rutkowski / Curator / Fundacja Galeri Foksal (20.11.2019), Edyta Jarząb - Vocal Performer / Activist (11.12.2019), Marcin Cecko - Dramaturg / Writer (18.12.2019), dr Jadwiga Rodowicz-Czechowska - Japanologist / Writer (22.01.2020)

Different ways to approach a body in dance

Born in Gdynia, Poland and graduated from Rambert School of Ballet and Contemporary Dance in London. Łukasz has worked with many international choreographers including Kerry Nicholls, Hubert Essakow, Itzik Galili, Vivien Wood, Ivgi & Greben. In 2015 he performed in "Betrayal: A Polyphonic Crime Drama" commissioned and presented by The Barbican in London.He has also appeared in the works of Claude Bardouil and Krzysztof Warlikowski in Nowy Teatr in Warsaw. In 2016 Łukasz worked with ilDance and performed works by

Fluctuations of the Future within today’s narratives

As a poet, playwright, photographer, visual artist, and performer, Marcin Cecko has long been working on the intersection of various artistic forms promoting the idea of interdisciplinary art.He has published three volumes of poetry: Rozbiorek (2000), Pląsy (2003) and Mów (2006). Recently he has been working both as a playwright and scriptwriter for science-fiction inspired plays and productions exploring ideas rarely exposed in theatre: anthropology, genetical modification, artificial intelligence.

Anna Gromada - sociologist, economist, a researcher at the Polish Academy of Sciences and a co-founder of the Kalecki Foundation think-tank. Anna obtained an MA in International Development from Sciences Po Paris, BA in Sociology and Politics from Cambridge University, BA in International Economics from the Warsaw School of Economics. She has collaborated with, i.a., the Chancellery of the President of Poland, French public administration, the OECD, The Guardian and Thomson Reuters.

Albert Salamon is a graphic designer. He completed an Industrial Design Department at The Academy of Fine Arts in Warsaw and lead the Visual Communication studio for ten years. He has worked in many different fields of design: names, signs, visual identifications, posters, informing systems, wrappings, web interfaces and mobile apps. He created new products and their development strategy.

Butoh Dance is a Battlefield

TO-EN is a butoh dancer and choreographer form Poland, artistic director of TO- EN Butoh Company. TO-EN is a next member of quite small generation of butoh dancers in the world. For many years she has been living in Sweden and studying the body work and butoh dance with SU-EN – famous butoh artist, choreographer and artistic director of the SU-EN Butoh Company. TO-EN has performed in the wide range of performances and projects presented on the main Swedish stages. Currently in Poland, TO-EN works in the field of stage performances, multidisciplinary and site-specific projects, land art, improvisations, interventions, exhibitions, lectures and workshops. TO-EN is artist's Japanese stage name and means EARTH – GARDEN.

Czułość gallery was created in 2010 by a group of young artists looking for their own language and field of expression in photography. They were artists who not only generationally but also aesthetically saw no place for themselves in existing institutions - so they decided to create their own, based on a co-operative, common production, self- help and far-reaching openness space to collaborate with other creative communities. The formula is a resounding success; over a short time Czułość has become an important place on the artistic map of Warsaw, and in the field of photography without a doubt the utmost dynamic.

Architecture, Standing in Between

Krystyna Fiszer is a French / Polish architect born in Paris, and since 2001 living in Warsaw. During her studies at the École the Belleville she traveled to Finland to complete her dissertation on the Finnish architect Alvar Aalto. After completing her studies she moved to Warsaw where in 2004 she opened the Fiszer Atelier 41 office, the office of Stanisław Fiszer , a Polish architect living and working in Paris since 1974. Her main realisation in Poland include : Kubicki’''s Arcade at Warsaw Castle, Orange headquarter in Warsaw, Housing estate on E. Orzeszkowej street in Warsaw, and Renovation of the Arsenal in Gdansk.

Theatre practitioner, writer, and visual artist. He is also a lecturer at the New Media Arts Faculty / PJATK Academy in Warsaw. In his work Klaudiusz draws on a range of disciplines that explore the possibility of embodying memories and spacial topologies by exploring states of inaccurate recall or ‘memory errors’. His recent exploration has also led him to scrutinise ideas connected to the shaping of human subjectivity. His investigation has led him to co-ordinate several projects in Australia, Europe and Japan. At present Klaudiusz works and lives in Warsaw, Poland.

Prof Jadwiga Rodowicz-Czechowska is a renown Japanologist, writer and theatre director. She is an author of numerous books on Japanese Nō theatre, translator of Nō dramas, Zeami Motokiyo treatises, and is also the writer of several plays. She entered the Ministry of Foreign Affairs of the Republic of Poland in 1993 and became the Ambassador for the Republic of Poland in Japan (2008-2012). At present, she is a lecturer at the National Academy of Theatre in Warsaw and is the President of the Urasenke Sadō School Sunshinkai.

Based in Paris since 2001, Julia Rodowicz studied design at the Studio Berçot fashion college while earning her living as a dresser, a salesperson and a window-maker. She first interned, then worked for 9 years as a Knitwear Designer at Balenciaga, a hundred-year-old Parisian fashion house. In 2014, she started freelancing as a Knitwear Consultant for luxury and mass-market brands including Calvin Klein, Lemaire, Nehera and Uniqlo U. Her focus now is on supporting young niche designers, including Atlein and Vejas.

Does Consciousness Need a Body?

Anatol Magdziarz is a lecturer and translator/interpreter working in English and French. His areas of interest include philosophy of mind and language, literature and lacanian psychoanalysis. He studied applied linguistics and culture studies at Warsaw University

The Future of the Economic Planet

Jędrzej Malko writes for the press on matters of international politics and economy and does freelance work as an analyst for economic think-tanks. He has studied under Slavoj Zizek, Michael Hardt and Simon Critchley and today is a doctoral researcher at the Warsaw School of Economics, where he is working within the field of heterodox price theories.

Dr Tomasz Mazur - a philosopher by profession, lecturer, education organiser, currently working as an IB coordinator of the 2nd SLO in Warsaw. He is a contemporary practicing stoic, and an author of books on stoicism (including O stawaniu się stoikiem). Over the last few years, he also runs Stoic workshops popularising philosophical techniques of self improvement. Founder of the Stoic Practice Centre, and co-author of the Stoic Way Stoic Education project.

The Anti-Fascist Year is a country-wide initiative promoted by a coalition of public institutions, NGOs, social movements, art collectives, individual artists and activists. Its goal is to commemorate all anti-fascist activists, men and women, who actively resisted fascism in the past, and to oppose the reoccurrence in the public domain of neo-fascist and neo-Nazi movements as well as of any and all parties endorsing and idolizing fascist ideas, discourse and practices.
The Anti-Fascist Year is a collective expression of protest against the glorification of war, the cult of violence, authoritarianism, nationalism, intolerance, misogyny, homophobia and racism which wreaks havoc on human conscience and destroys our community and natural environment.

Masculinity in crisis and the political implications

Szymon Grela - sociologist, graduated from University of Cambridge where he researched new wave of right wing movements in Europe. Former journalist at OKO.press and columnist for Krytyka Polityczna and Gazeta Wyborcza. Currently works in political communication for Robert Biedroń and his new political movement. 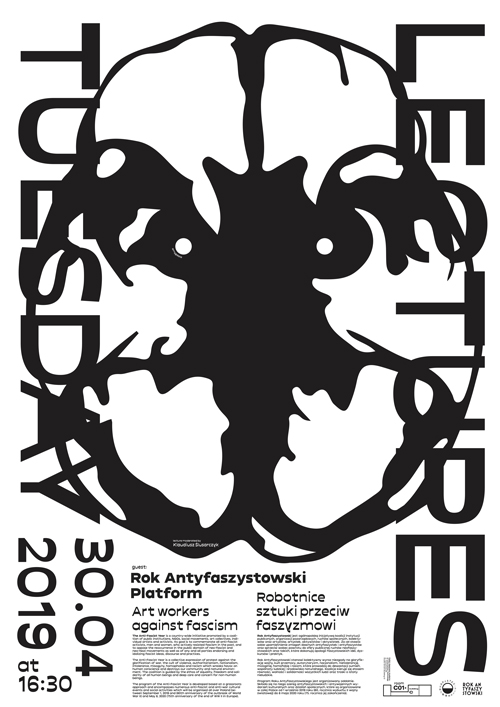 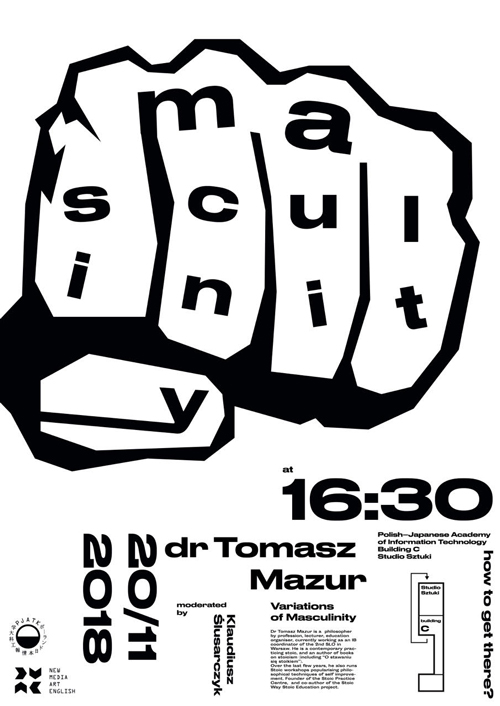 Initiated in 2016 by Klaudiusz Ślusarczyk, the Meetings with a Specialist is a series of curated lectures by Polish and international experts from different fields, not necessarily academic. The aim of the meetings is to introduce different points of view, different experiences and expertise and, as a result, facilitate a discussion in the problems of the world within and outside the discipline of art and design.

This semester’s theme : The Others
Introductory Note: In the latter part of the 20th century, Jacques Lacan once remarked that he sees no other source of brotherhood other than through segregation. A striking comment on ideas of that which brings us together in relation to those we mark as being other. Us and them, is this the only way that we join together as communities? Is there another possibility? Are we able to embrace otherness in today’s polarised society? In this series of lectures, we will scrutinise the role of the others, those through whom we come together but also through whom we may, in fact, learn more about ourselves. - Klaudiusz Ślusarczyk

Past Themes:
On Aggression
Masculinities
Utopia
The Future
Space
The Body 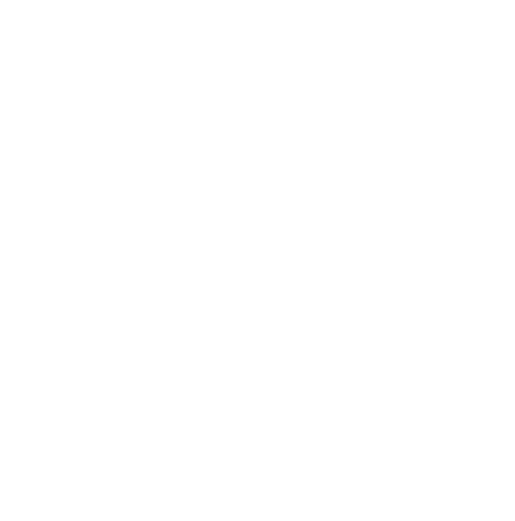